CASABLANCA, MOROCCO: Britain’s Prince Harry and his wife Meghan, pregnant with their first child, arrived in Casablanca on Saturday night for a three-day tour to promote girls’ education and mental health awareness.

The couple were greeted by the British Ambassador to Morocco Thomas Reilly and his wife Alix, and Prince Harry then inspected a Guard of Honour at the airport.

The couple were in Morocco to visit projects which aim to strengthen the role of women in society, Reilly told reporters, as well as programs tackling mental health challenges. 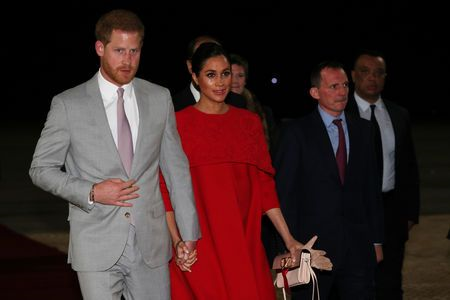 Both are themes close to the hearts of the royal couple.

“(They) will be shown first hand the transformational impact of community-based programs and Morocco’s changing social attitudes toward women,” Reilly told reporters.

On Sunday the pair will visit a school in the Atlas mountains aimed at promoting girls’ education in rural communities. The prince will give the school’s founder, Michael McHugo, an MBE, a royal award, for charitable work.

Harry married the former Hollywood star Meghan Markle last May. Since then, the couple has become media favourites at home and abroad. The North African trip is expected to be the last one abroad for Meghan before their baby is born in the spring.