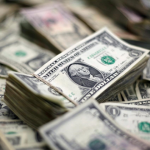 ISLAMABAD: The Pakistan Tehreek-e-Insaf (PTI) government has borrowed $2.3 billion in the first half of the current fiscal year (2018-19), according to the Economic Affairs Division. “During the July-December period of the fiscal year 2018-19, the government borrowed $836 million from China and $500 million from commercial banks,” the EAD stated. “The government also took $339 Read More

The post Govt borrowed $2.3bn in first half FY19 appeared first on Profit by Pakistan Today.