ISLAMABAD: The federal government accepted the resignation of Federal Minister of Science and Technology Azam Swati from the post, according to a notification dated January 9.

“The resignation has been accepted with effect from December 6, 2018,” the notification added. 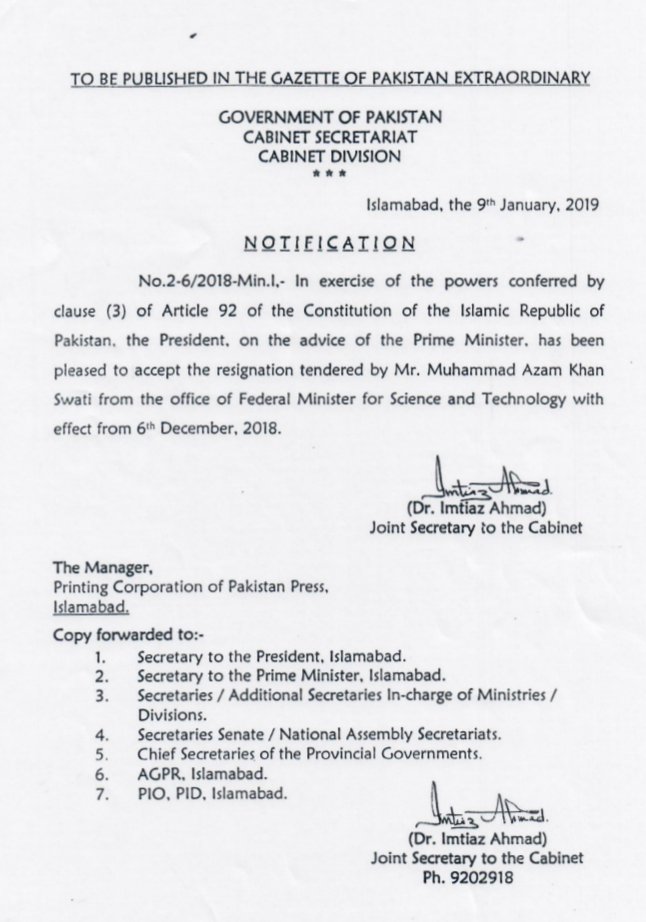 The Supreme Court has been hearing a case against Swati pertaining to the transfer of Islamabad IGP Jan Muhammad.

Swati is accused of playing a role in the transfer of former Islamabad inspector general of police Jan Mohammad — an allegation over which the SC had pondered taking action against him under Article 62 before forming a joint investigation team (JIT).

The former IGP’s transfer took place after Swati’s son registered a case against a family of slum dwellers for allegedly trespassing on his family’s land. Five people, including two women, were arrested for trespassing on the land and beating up Swati’s guards. They were released after a day’s detention as police said a settlement had been reached between the minister and the detained family.

On November 19, 2018, the court-formed JIT had held Swati and his employees responsible for the altercation that took place at his farmhouse and allegedly transpired into the police chief’s transfer.

Last month, Swati resigned as federal minister for science and technology to “uphold his moral authority”.

“To uphold my moral authority, I sent my resignation to PM and told him that I cannot work under such circumstances,” he said, adding that now he will defend his case without any portfolio or authority.

The top court is also conducting Swati’s trial under Article 62(1)(f) of the Constitution on assets beyond means case, under which former prime minister Nawaz Sharif and Jahangir Tareen were disqualified.

Furthermore, US Department of Homeland Security handed over important documents to the JIT, probing Swati’s alleged misuse of authority, and stated that he falsely represented himself as an American national in the USA in 2000 and 2001.