KARACHI: Chief of Army Staff (COAS) General Qamar Javed Bajwa on Wednesday said that the improvement in the internal security situation of Pakistan has paved way for foreign investments.

He made those comments during a visit to the forward troops in Gadra Sector.

Gen Bajwa said that Pakistan Army will continue to play its part in ensuring a secure environment for business and entrepreneurship of both local and foreign investors.

He also lauded the operational preparedness and high state of morale of the troops.

“Pakistan Army is fully committed to guarding the frontiers of the country,” he said.

He was accompanied by Karachi Corps Commander Lt Gen Humayun Aziz and was then given a detailed briefing on the progress of the pilot projects in the visit to the Thar Coal Project.

The ceremony was attended by a large number of serving and retired officers and soldiers from Army Air Defence. 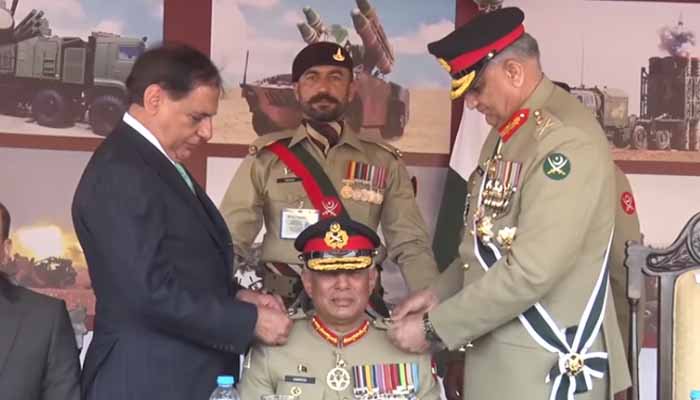 In addition to that, he also appreciated the Army Air Defence Corps contribution in the war against terrorism.

Earlier this week, a statement released by Inter-Services Public Relations stated that Lieutenant General Majid Ehsan, who was serving as the President of National Defence University (NDU) was being appointed as the Lahore Corps Commander.

Meanwhile, Lieutenant General Aamer Riaz who was serving as Lahore Corps Commander has been appointed as the NDU President.

On his arrival, the army chief was received by Air Marshal Mujahid Anwar Khan, ISPR said.

While interacting with combat crew, the COAS lauded professionalism of participants of exercise and appreciated the efforts of PAF and People’s Liberation Army Air Force (PLAAF) in conducting international air exercise in a befitting manner.

While highlighting the exemplary relations between Pakistan-China, he said that exercise would further strengthen and promote the friendship, exchanges and cooperation between two great nations and armed forces of both countries.

The exercise is seventh in the series of Shaheen exercises and is conducted each year on an alternate basis.