According to reports, “Authorities have completed the Multan Metro Bus project and people will soon have the best transport facility in the city.”

The service will now be available for general public. Initially 35 busses will operate with the capacity to allow approximately 95, 000 people to travel daily.

The 18-kilometer long track will begin from Bahauddin Zakariya University and end at Kumharan Chowk connecting 21 stations—of which 14 are situated at flyovers while seven are located on land routes.

The metro bus project began in Multan in 2015 and it was expected to complete in a year. However financial constraints and import of equipment caused a seven-month delay. During this stretch of time citizens had to brave traffic jams and broken roads.

The Punjab government has spent over Rs.28 billion on the project, with 21 bus stations set up on 18.5km long route to facilitate 97,000 commuters daily.

Addressing the inauguration ceremony, Prime Minister Nawaz Sharif said the metro bus project is a gift to the people of Multan.

“We are not here for any political rally, we are here to give you your rights,” the Prime Minister said, to a loud applause from the audience.

Taking aim at his opponents, the Prime Minister asked, “Where is ‘Naya Pakistan’?”

“Come to Multan if you want to see ‘Naya Pakistan’”, he said, adding that no one had thought of initiating the metro project in Multan before.

The Prime Minister pointed out the Multan metro project had been completed in just 1.5 years by Punjab Chief Minister Shahbaz Sharif.

He added that the motorway would also come soon to Multan. 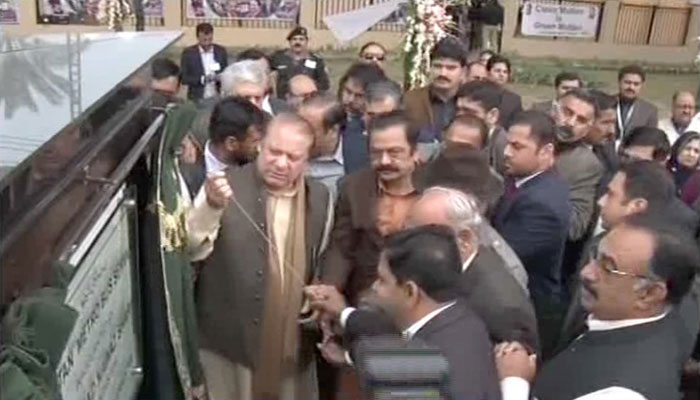 The Prime Minister said the Hyderabad- Karachi motorway would be completed this year, and a six-lane motorway from Peshawar to Karachi would also be built soon.

Following that Shahbaz Sharif addressed the crowd at the ceremony and emphasised the need for proper road infrastructure in the progress of a nation and said the Prime Minister has laid the foundation stone for development in all four provinces.

“The Multan Metro project is better than the Lahore and Islamabad projects in terms of quality,” the Chief Minister noted.

He said the federal government has released funds for Karachi’s Green Line project as well.

Alluding to the opposition, Shahbaz Sharif said the ‘dharnas’ had delayed the completion of several development projects.

“These dharna people want to ruin Pakistan’s destiny,” he lamented, adding that Pakistan remains on course to achieve progress and the enemies’ plots have failed.

NAB files reference against Pakcom (Ltd) over its willful default