A video live-streamed on Facebook shows a Georgia woman beating and cursing at her teenage daughter for posting provocative pictures online.

In shocking scenes, the woman can be seen first hitting the 16-year-old with what appears to be a plastic object before slapping the girl all over her body.

The incident was reportedly sparked when the teen shared a picture of herself and her boyfriend on Facebook wearing no more than a towel. Upon discovering this, the infuriated mother decided to take the girl’s phone and livestream a beating to the girl’s Facebook page.

A later post that appears to be written by the mother, who has not been charged, says “I love my daughter with all my heart.” But she says her daughter won’t “disrespect me.” 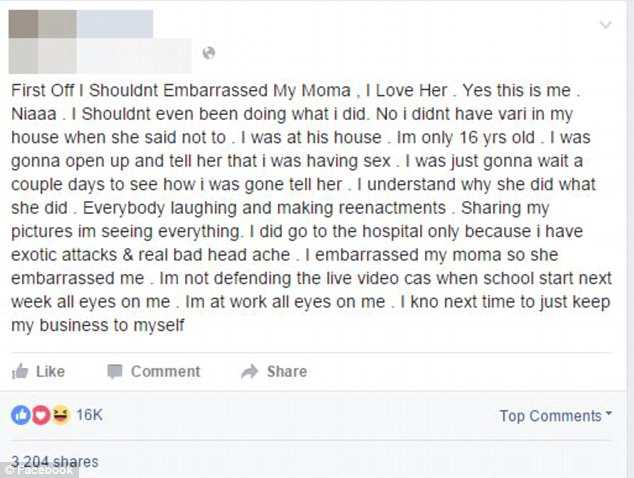 Many people empathised with the mother and the lesson she was trying to impart. “I understand where this mom is coming from but she could have handled it in a respectful way. She’s only trying to save her ’cause it’s a nasty world out there,” one Facebook comment read.

However, many also thought the mother took the beating too far, especially for disciplining a teenager. “There is something so sick and disturbing about going out of your way to embarrass your child. Especially, when your form of discipline is about embarrassing your child for natural urges we all experience at 16 years of age,” writer Veronica Wells wrote in a post.

Savannah police say the daughter told them she feels safe in the home. Police spokesman Sonny Cohrs says there are no charges at this time, but he says the case has been referred to the state’s child welfare department.

Mira Rajput requests paparazzi to ‘leave the photographing to the parents’